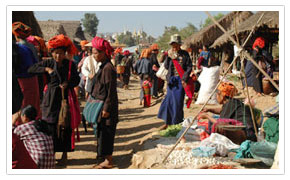 Nyaungshwe is the main village around Inle Lake and an important trading hub for the villages in the lake. Many traded products there are shipped all over the country.

Nyaung Shwe Market is 5-day market, opened only on every 5th day, is very interesting spot for tourists. Women from various hill tribes who live in the Inlay region come to sell their home crafts, products, fruits and vegetables in this market. 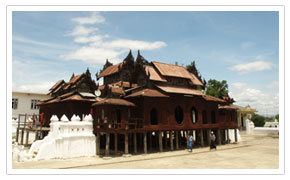 The Shwe Yan Pyay Monastery, is just a short walk north of NyaungShwe, is a fascinating wooden monastery built in the early 19th Century.

The monastery has a beautifully carved, gilded ceiling. The red painted, teak-wood building is an interesting architectural structure on its own. It’s over 150 years old and sits on sturdy stilts. Inside are mosaics, mirrors and ornate carvings, some gilded with gold. Monestary is today remains in full operation as school and home for young novice monks and their teachers. Photographers are drawn to it for its unique oval windows – and the incredible light found inside - and for the white stucco temple next to it with its red interior and thousands of niches, each holding a small Buddha. 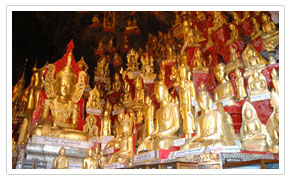 Pindaya is about 2 hours drive by car. Mainly famous for its limestone caves called Pindaya Caves where thousands of Buddha images have been consecrated for worship over the centuries. The views inside Pindaya Caves are very awesome with almost 8,000 Buddha images, and most of them are gold.

Huge monastery compounds with numerous pagodas and temples in different stages of dilapidation are much respected by such ethnic groups as the Shans, Danus and Paos living in the environs of Pindaya. Traditional Shan umbrella work in Pindaya is also to observe. 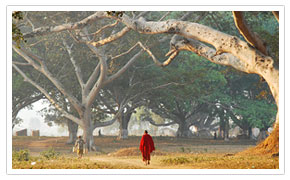 Kalawis is also about 2 and half hours drive by car. It is located to the west of Inle Lake, inhabited by only a few thousand of people, originating from the various kind ethnic groups of Myanmar. It has some interesting colonial remains, but Kalaw is better known as an excellent base for walking in the cool and picturesque mountains, blanketed in gnarled pine forests and bamboo groves. On longer treks it is possible to discover little-visited minority hill tribe villages. The wonderful rolling countryside between Kalaw and the picturesque Inle Lake shelters some of Asia’s most unspoilt minority villages, including Palaung, Pa-O, Taungthu and Danu communities. There are many smaller caves in the surrounding hills and Kalaw has its own Shweohnmin Pagoda cave. Myin Ma Hti Cave near kalaw is also a must place to enjoy. 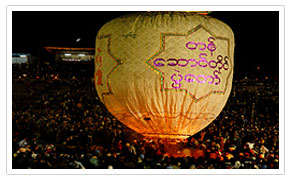 Taunggyi, the capital of Shant Stats, is about 45 minutes drives by car from Nyaung Shwe. The most significant in Taunggyi is the Tazaungdaing Lighting Festival. Taunggyi Tazaungdaing Festival is held annually and is accompanied by communal offering of Kahtein yellow robe offering procession. The Myoma Market (well known as Taunggyi Market), a place where people from the environs sell their regional products andt is also the gathering point of different national races residing in Taunggyi. The St. Joseph's Cathedral a Baptist church, established by early missionaries, Sulamuni Pagoda and Shwe Phone Pwint Pagoda are also famous places in Taunggyi. 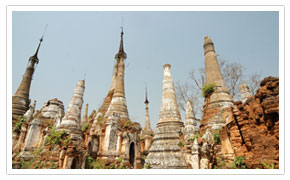 Kakku Pagoda Complex, Taunggyi features a cluster of fantastic ancient monuments and is located in the heart of Shan State and about 33 miles from Taunggyi. It is mainly a group of thousands of pagodas and temples which were built in the 16th century. These are of great historical importance due to their existence dating back from 2000 years. Visitors can get to see the natural vegetation and cultivation along the roads which leads to the Pagoda Complex. They have ample scope of watching the lifestyle of Pa-O tribal people and have a sneak peek at their culture. One can have an insight of the traditional lifestyle of these people who made the foundation of the amazing Pagoda Complex. 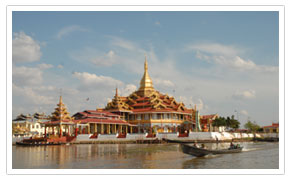 Inle Lake is just transferable from the hotel. The Lake is 900 meters above sea level and outrageously picturesque - it has dead calm waters dotted with patches of floating vegetation and busy fishing canoes. The Inle style of religious architecture and Buddhist sculpture is strongly Shan-influenced.

Inndain Pagodas in ruins covered by trees and bushes which are supposed to be old about over 700 years.

Phaungdaw Oo Pagoda, one of the principal shrines in Myanmar. The building dates from 18th century and 12 century Buddha images are completely lost their shape due to the fact that devotees are constantly plastering them with gold leaf. Annually pagoda festival held in September/October.

Nga Phe Chaung Monastery is well known as Jumping Cat's Monastery should not be missed during the stay in Inle Lake. Wooden monastery on stilts over the lake, built four years before Mandalay Palace. It has a collection of Buddha images in Shan style, Tibetan, Bagan and Inwa style. 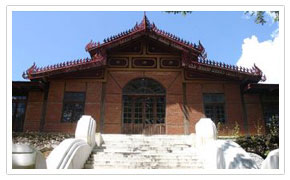 This small Shan Chief's museum is just 10 minutes walk from the hotel. This building is formerly a Shan Chief's Resident and the Chief has given up his power before the military made a coup and took the Country-power in 1962. He was the first president of the Union of Burma in 1948. Nicely displayed with royal throne, royal Shan families' costumes, the utilities those were used in the official occasions like sedan, divan, chairs, decoration materials and their photos. US$ 2 will be charged as the entrance fees.